No, I don’t mean that “boring, bland, diet food” (although healthy food is not boring, but more on that later). What I’m talking about is your standard food intake. You know, the “wholegrain” sandwich and pasta, the takeaway pizza, the “healthy” rice bowl or potato mash – those kind of things.

How can they make you depressed – they taste like happiness right?! Well, despite the short-term boost in mood, a high-carbohydrate, high-sugar diet can lead to something called insulin resistance.

What is it? IR happens when the cells in your body are not responding to the hormone insulin. Insulin, a hormone produced by the pancreas, takes excess glucose from our blood stream into many cells throughout the body.

When your cells refuse to open their ‘doors’ to insulin, the excess glucose remains in the blood wreaking all sort of trouble. Here’s just a few of the issues caused by IR:

OK, we now know that both insulin and glucose are needed to take nutrients into our cells. But how does that relate to our mood, brain chemistry and depression specifically?

You may have heard that our moods are regulated by our brain chemistry. What that means is that certain chemical molecules can affect how our brain cells function. Such molecules are called neurotransmitters – they transmit ‘information’ from a nerve cell to another nerve cell or a muscle cell or any other cell in our body.

Neurotransmitters are made inside the brain from amino acids (the building blocks of protein) and other compounds. To get inside the brain, the amino acids have to pass a protective barrier called the blood-brain barrier (BBB). This process requires sufficient amounts of insulin and the cells to be sensitive to insulin’s actions.

The important neurotransmitters for regulating our moods are serotonin, dopamine, adrenalin, acetylcholine and GABA. Here’s how two of them are made:

So when the cells in our body, including the brain, are not responding properly to insulin fewer amino acids can cross the BBB leading to a drop in the amount of neurotransmitters in the brain. This alters our brain chemistry and can lead to many emotional and psychological symptoms including the below: 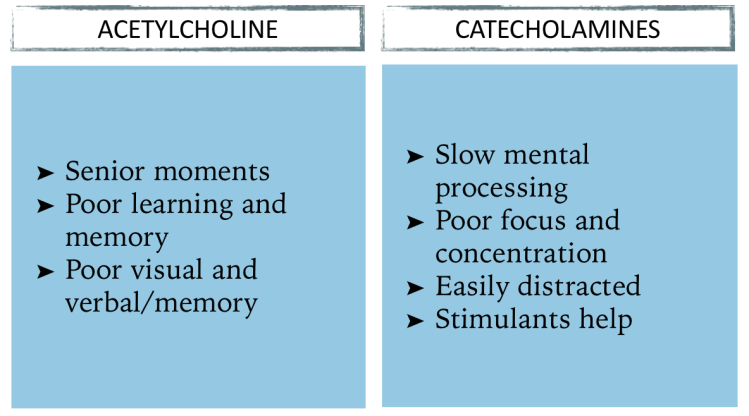 So here you are – what you eat can make you depressed by altering your brain chemistry! Of course there are more factors including stress, addictive and toxic foods as well as vitamin and mineral deficiencies. These will be covered in future posts, so keep an eye out if you’re interested!

2 thoughts on “Is Your Food Making You Depressed?”