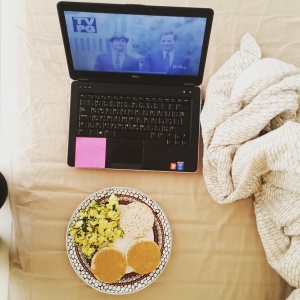 So a couple of weeks ago a colleague in the office mentioned that a few of his friends were trying a new diet trend – eating carbs at bedtime to lose weight!

I was  very sceptical when I heard that since I knew very well that typically this is not recommended because the body will not have enough time to burn the calories and will store them as fat instead. But when two of my trusted fitness & nutrition bloggers posted about this within a week of each other I had to investigate what the fuss was all about.

Turns out there may be some truth in this. Shawna Kaminski, a long time athlete (swimming, skiing and bodybuilding) and top fitness trainer for women over 40, shared links to other industry pros talking about how you should not cut out carbs from your diet and even – shock & horror! – eat them before bedtime!

First off we have Nate Miyaki who is a firm believer that managing carb intake in the correct way can actually boost fat burning. He stresses how important food timing is. For example, his research found that eating carbohydrates (even the healthy ones) in the morning can hinder fat burning.

On the other hand, eating carbs at night can burn fat faster. A 2011 study in the Journal of Obesity found that those eating the majority of their carbs (about 80%) in the evening burned more fat and had fewer cravings than those who spread their carbohydrate intake throughout the day.

Hold your horses – cake may not be the answer here!

Then I remembered reading fellow blogger Deinza’s post where she explains that eating carbs at bedtime does not necessarily cause weight gain. Echoing Miyaki’s words she says: “With carbs, it is all about the right timing and amount you eat.”

However, she stresses not only the timing of carbohydrates but also the type of carbs to be had (sorry no cake at bedtime!). For example, vegetables are also carbs but they do not affect insulin levels (so you can eat as much as you want). Starchy carbs (bread, potatoes, rice & pasta) are the ones to watch.

And here is where timing is key. Despite what Miyaki’s says about eating carbs in the morning, the general consensus is that this is nevertheless a good time to have them. This is because in the morning insulin and glycogen levels are low (so you need some fuel) and you have the rest of the day to burn the calories. Another optimal time is post workout when glycogen levels are low as well.

Yet, eating carbs in the evening can be beneficial too. They can help promote sleep by releasing serotonin (the happy hormone) and leptin which decreases hunger. Again the type of carbs is important – starchy carbs are ok, but aim for healthier options such as quinoa, oats, sweet potatoes and wholemeal bread.

A Final Word of Caution

Although there is some scientific evidence that eating (healthy) carbs at bedtime promotes weight loss and fat burning because:

There are a few things to remember:

3 thoughts on “Eat carbs at night for weight loss??”